At Chesapeake Shakespeare Company, we believe that just because we can’t be in the same room this year, it doesn’t mean we can’t still revel in our beloved traditions together. Your favorite CSC artists are bringing you not one, but TWO celebrations of music and merriment to help keep spirits bright.

Both these events are absolutely free.  It’s a gift to our Chesapeake Shakespeare family, to let you know how much we miss you! 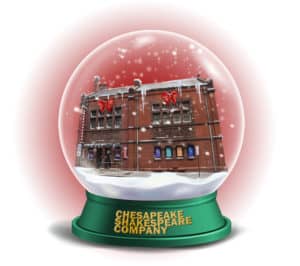 First, CSC has created Be Merry! Make Holiday!, a special variety program brimming with song, story, and spoken word to bring cheer to audiences this holiday season. The program is being pre-recorded and produced in conjunction with Keystone Productions of Baltimore. Be Merry! will premiere on Friday, December 18, 2020 at 8 p.m. and have a limited run on the company’s social media platforms through the new year. Click here for viewing options.

Additionally, the company will celebrate this seventh—and socially-distanced—year of its traditional production of A Christmas Carol with a live Zoom reading on Monday, December 21, 2020 at 8 p.m. Founding Artistic Director Ian Gallanar has adapted his own long-running adaptation (with a Baltimore twist) especially for this virtual event. Click here for viewing options.

Laura Boydston, Chair of Chesapeake Shakespeare Company’s Board of Trustees, calls these events “a gift to the community. We cannot gather in our beautiful theatre to revel in our annual production of the Christmas spirit and redemption. We still wanted to share this tradition to let our audience know we miss them.”

For the past six years, audiences were treated to a robust evening of performance at CSC’s productions of A Christmas Carol, complete with musical numbers in the show, local choir performances, and sing-alongs with the cast. To make up for a lack of merriment, CSC artists conceived Be Merry! Make Holiday! (drawing the name from Shakespeare’s The Tempest, Act IV, Scene i.) Producer and director Ron Heneghan notes that “since performers—and audiences—cannot safely gather en masse to enjoy traditional holiday presentations or local choir recitals, our artists were determined to find a way to lighten holiday spirits at home!”

The program will feature CSC mainstays, as well as members of the Baltimore community, in a host of performances, including songs from past productions of A Christmas Carol (which will be strictly limited in the live presentation on Dec. 21); readings of poems and stories like Longfellow’s “Christmas Bells,” “Yes, Virginia, There Is a Santa Claus,” and “A Visit from St. Nicholas” by Clement Clarke Moore; and a special arrangement of “Silent Night,” performed by members of the CSC Veterans Ensemble, Olive Branch & Laurel Crown. 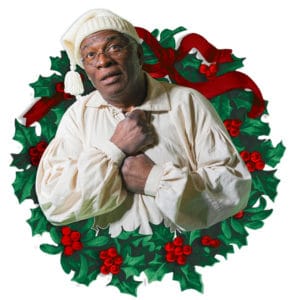 A Christmas Carol was first presented at CSC in 2014 in conjunction with the grand opening of the company’s theatre at 7 South Calvert Street in downtown Baltimore. Gallanar’s adaptation of Dickens’ beloved tale unfolds in Victorian Baltimore’s familiar neighborhoods, including Fells Point and Mount Vernon, and celebrates Baltimore charm and Chesapeake culture.

CSC Associate Artistic Director Scott Alan Small will direct the virtual adaptation, which will take place live on Zoom with actors presenting their roles. Gregory Burgess will reprise his role as Ebenezer Scrooge for the seventh year in a row and will be filmed live in the CSC theatre. The roster will be rounded out by cast members from the previous six stagings, including special appearances by Gallanar and Managing Director Lesley Malin as the jolly Fezziwigs. The reading will feature limited theatrical elements—as well as plenty of social distancing—to ensure the safety of the cast and crew.

Both programs are generously sponsored by members of Chesapeake Shakespeare Company’s Board of Trustees.

ABOUT THE PROGRAM:
A merry and heartfelt band of CSC favorites, company members, and Baltimoreans join together to celebrate the holiday spirit through song, story, and spoken word.

WHEN and WHERE:
Be Merry! Make Holiday! premieres Friday, December 18, 2020 at 8 p.m. on both Facebook and YouTube. After the premiere, the recording of Be Merry! will be available online through Jan. 1, 2021.

TICKETS:
No tickets needed! This event is available free online.

ABOUT THE PLAY:
Adapted from Charles Dickens’s classic novella by Ian Gallanar, Founding Artistic Director of Chesapeake Shakespeare Company, the beloved tale unfolds in Victorian Baltimore’s familiar neighborhoods, including Fells Point and Mount Vernon. In story and song, this original adaptation celebrates Baltimore charm and Chesapeake culture. Resident Company Member Gregory Burgess returns for the sixth year as the grumpy miser whose cold, stingy heart must thaw if he wishes to save the life of the ailing Tiny Tim—and Christmas!

WHEN and WHERE:
A Christmas Carol streams live on Facebook and Zoom on Monday, December 21, 2020 at 8 p.m.

TICKETS:
No tickets needed! This event is available free online. Registration is required to participate on Zoom.

Founded in 2002 with the goal of producing “Shakespeare that’s not stuffy,” Chesapeake Shakespeare Company (CSC) is dedicated to bringing the plays of Shakespeare and other classic playwrights into the lives of as many people as possible in ways that are personally meaningful, educationally inspiring, and theatrically compelling. Our mission is to engage our communities in the exploration of what makes Shakespeare so timeless and relevant while strengthening the connection between audience and artist. In 2012, Chesapeake Shakespeare Company acquired the Mercantile Safe Deposit and Trust Company building in downtown Baltimore, renovating it into a modern Globe Theater for indoor performances, while continuing to produce outdoor Shakespeare every summer at the PFI Historic Park in Howard County. The organization regularly serves 30,000+ people annually through artistic projects and community engagement initiatives, and vibrant and continually growing education activities. CSC’s education program includes both an extensive matinee series, camps, classes, and in- and out-of-school residencies.