Jog on, jog on, the foot-path way 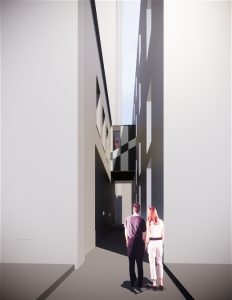 In 2017, Chesapeake Shakespeare Company moved our offices and education programming into the Merchants Club next door to our theatre at 206 East Redwood. We were thrilled to have extra space and natural light for our offices on the third floor and the elegantly oak-paneled fourth floor as the Studio at CSC for education and for rehearsals.

It was exciting to start building a theatre campus and we felt very grown up.  We hosted the 2017 Shakespeare Theatre Association conference, and our friends from all over the country and the world were so impressed by what we had achieved in fifteen years and by our fantastic facilities that could accommodate three days of plenaries and break-out sessions.

However, it soon became clear that there were negatives to our expansion.  To get from the theatre to the offices, we had to exit onto Calvert, go around the building onto Redwood, go into the Merchants Club, and climb the stairs to the third and fourth floors.  Much of our staff was often not setting foot in the theatre, which is beautiful enough to serve as an inspiration all by itself.  Our young students had to follow the same circuitous path.

To fix this and restore our bond with the heart of our company, we are building a pedestrian bridge over the alley that separates our theatre from The Studio.   In the theatre, the bridge opens onto the second mezzanine, and connects to the third-floor offices in the Merchants Club.  Because the buildings don’t line up exactly, a staircase (with wheelchair lift) evens things out.

We have reunited our superstar team of Quinn Evans Architects (formerly Cho Benn Holback & Associates) and Southway Builders, local firms who designed and renovated our beautiful theatre, and they are hard at work.

It took two years of fundraising to make the bridge happen but thanks to The State of Maryland (especially the Baltimore City delegation, led by Senator Bill Ferguson and Delegate Luke Clippinger, and Senator Guy Guzzone in Howard County who enthusiastically champion our work year-round), The France Merrick Foundation, Mayor Jack Young and The City of Baltimore, and The Abell Foundation, we were able to raise enough money to make this ten-foot bridge a reality.

In November, construction will be complete and our celebration of the opening of the bridge, among other things, will be held with a swanky black tie masquerade on Saturday, November 9th.  I hope you’ll join us to celebrate linking our two worlds.  We couldn’t be more delighted.