“Once more unto the breach, dear friends, once more.”

King Henry V has just ascended to the throne, but before he can rule a nation—let alone conquer another—he must prove himself as a leader of men. Armed with some of the most powerful speeches in the Bard’s arsenal, Henry and his “band of brothers” will overcome overwhelming odds. Don’t miss our compelling take on Shakespeare’s great tale of leadership, war, and storytelling.

This production is dedicated to the memory of CSC's friend and patron, Patrick Hughes. 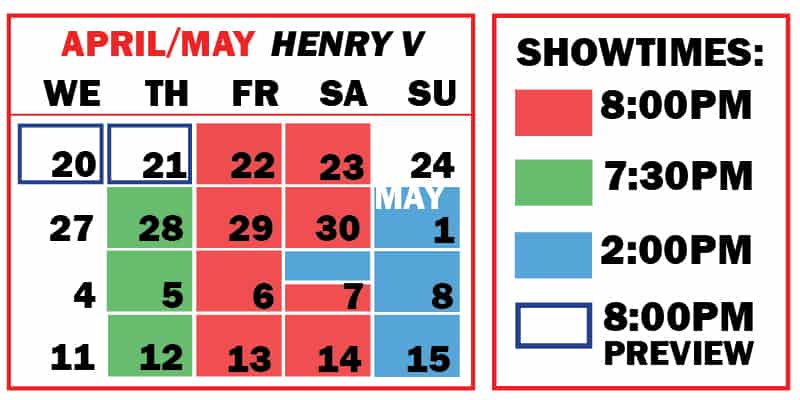 Due to limited capacity this year purchasing your tickets in advance online is highly recommended!

Online ordering for shows at the Downtown Theatre will end three (3) hours prior to the performance. Any remaining tickets will be available for purchase at the Box Office one hour before the performance.

HENRY V is set in England in the years 1413-1420. The political situation in England is tense: Several bitter civil wars have left the people of England restless and dissatisfied, and to gain the respect of the English people and the court, Henry must live down his wild adolescent past.

Henry lays claim to certain parts of France, based on his distant roots in the French royal family and on a very technical interpretation of ancient land laws. When the young prince, or Dauphin, of France sends Henry an insulting message in response to these claims, Henry decides to invade France. Supported by the English noblemen and clergy, Henry gathers his troops for war.

Henry’s decision to invade France trickles down to affect the common people he rules. In the Boar’s Head Tavern in Eastcheap, some of the king’s former friends—Pistol, Nim and Bardolph, whom he rejected when he rose to the throne—prepare to leave their homes and families. As they prepare for the war, they remark on the death of Falstaff, the elderly knight who was once King Henry’s closest friend.

The English sail for France, where they fight their way across the country. Against incredible odds, they continue to win after conquering the town of Harfleur, where Henry gives an impassioned speech to motivate his soldiers to victory. As the English advance, Nim and Bardolph are caught looting and are hanged at King Henry’s command.

The climax of the war comes at the famous Battle of Agincourt, at which the English are outnumbered by the French five to one. The night before the battle, King Henry disguises himself as a common soldier and talks to many of the soldiers in his camp, learning who they are and what they think of the great battle in which they have been swept up. When he is by himself, he laments his ever-present responsibilities as king.

The battle is fought the following morning, St. Crispin’s Day and the result is extraordinary. . .

When Charles IV, King of France, died in 1328 without an heir, the succession was thrown into the air.  The decision was made to award the kingship to Philip, a grandson of Philip III.  Edward III of England, the French King's nephew (Edward’s mother was Charles IV’s sister) and next of kin, was barred from the throne due to the Salic Law, which expressly forbade the inheritance passing through a female.  Edward took the title of King of France anyway, and used his claim as a basis for invading France, leading to the Hundred Years’ War.  His successors all used the title as well and continued the war, until Henry V, after his great victories in France, agreed to marry Charles VI’s daughter Katherine, and accepted the title of Heir to the French throne. 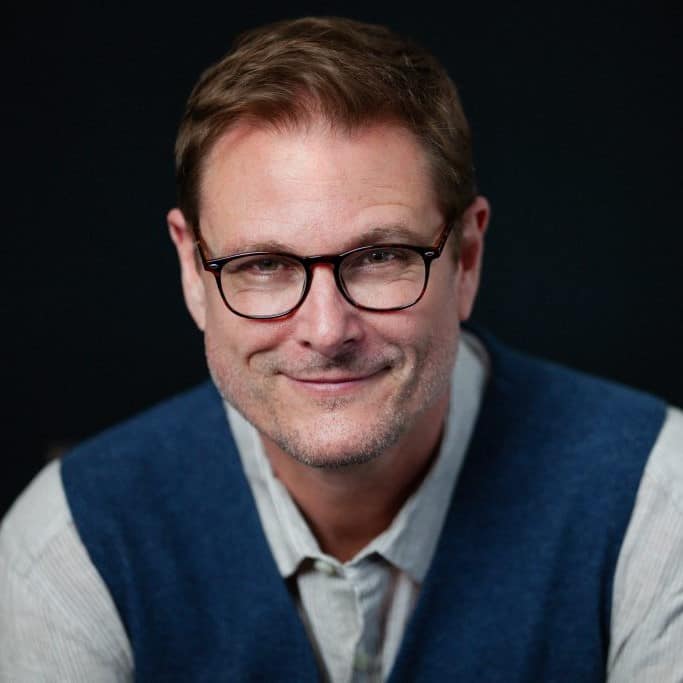 Join us before the final matinee as we sit down with Director, Alec Wild to discuss their relationship to the play and discoveries made while bringing the world of Henry V to the CSC Stage.

Masculinity, Warfare, & the State: The History behind Henry V 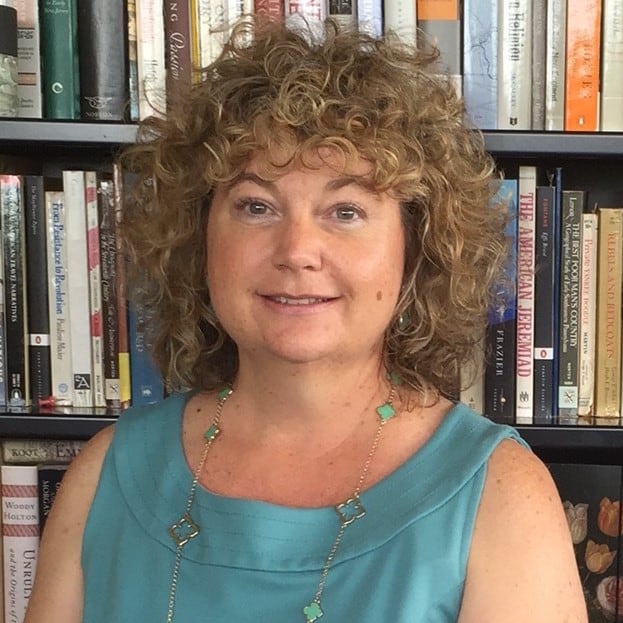 A historian of medieval and early modern British history, Prof. Froide will discuss some of the real people and events that appear in Shakespeare's Henry VI. These include the Hundred Year's War between England and France, the role of the English yeomen and their weaponry at the battle of Agincourt, emerging English nationalism, and the popular idea of the 'warrior king' who leads his men into battle. This is an ideal that still holds resonance today and can be seen in the media's portrayal of President Zelensky during the present Russia-Ukraine war. 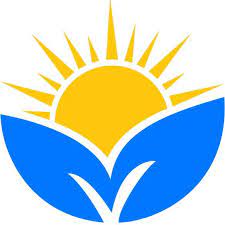 "In peace there's nothing so becomes a man As modest stillness and humility: But when the blast of war blows in our ears, Then imitate the action of the tiger." The themes of Peace and War have been high topics of conversation for dramatists from Shakespeare's time through today. Join us as we explore another classic of world theatre dealing with the challenges of war: Bertold Brecht's "Mother Courage and her Children". Proceeds from the reading will be donated to Sunflower of Peace in support of providing relief to the current wartime crisis in the Ukraine. CSC Stands With Ukraine! 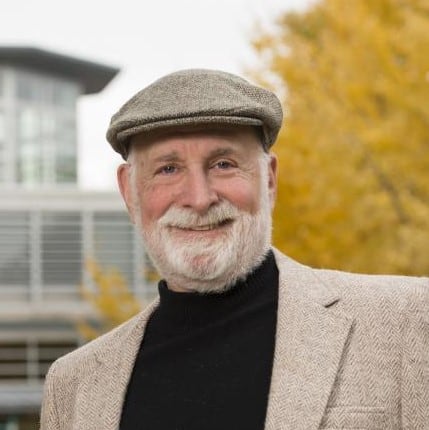 Henry V is the most theatrically self-aware of all of Shakespeare's plays and our production sharpens that perspective. Professor Schvey will speak about Shakespeare's theatrical imagination and how it is reflected in this great history play. 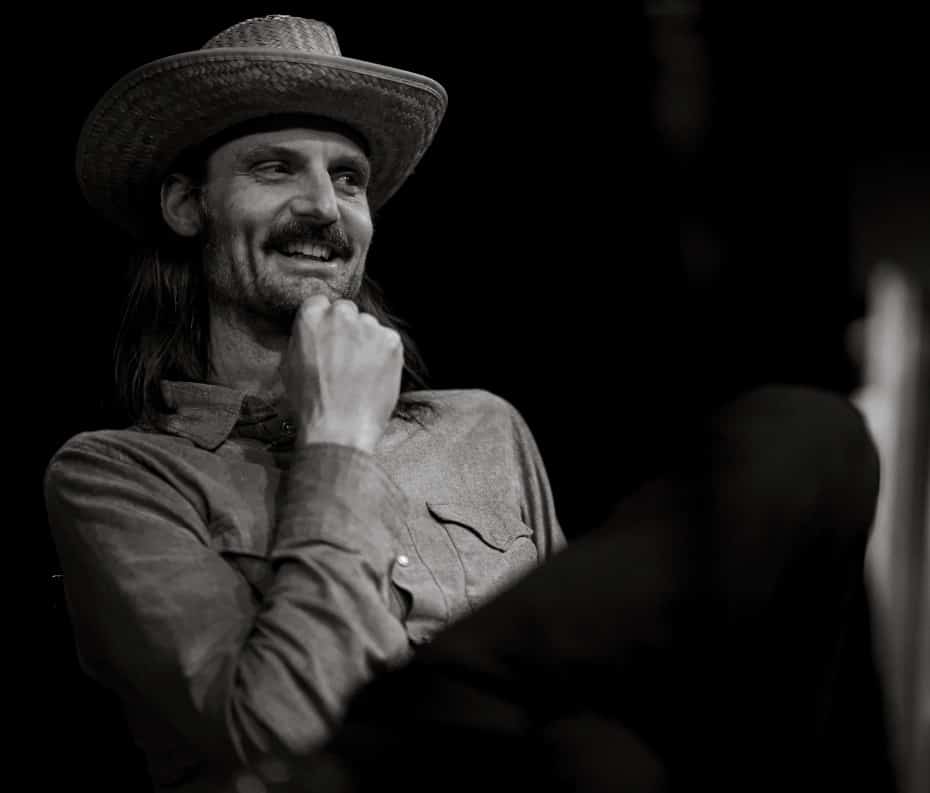 Join us as Baltimore area musician and composer on Henry V, Caleb Stine shares an energetic and acoustic music set following the performance. The bar will remain open. Discount tickets will be sold for attending both the performance and staying post-show.

Know Before You Go - Health and Safety Expand

Proof of vaccination will be required to enter the theatre. For those unable to get a vaccine due to age, medical restrictions, or religious beliefs, proof of a negative PCR COVID-19 test within the past 72-hours of your performance will be required.

For children under 12, when accompanied by a fully vaccinated adult, may enter the theatre if they have proof of one dose of an FDA or WHO approved vaccine at least 14 days before the performance date or proof of a negative PCR COVID-19 test within 72 hours of the performance start time.

Masks must be worn at all times while in the theatre.

CSC is following all COVID-19 regulations and guidelines issued by both state and county officials in Maryland to ensure your visit to the Downtown Theatre is a safe and pleasant one.

To read the most up-to-date health and safety information and learn more about the venue, click here.

IT'S GOOD TO BE THE KING - HENRY V PHOTO GALLERY 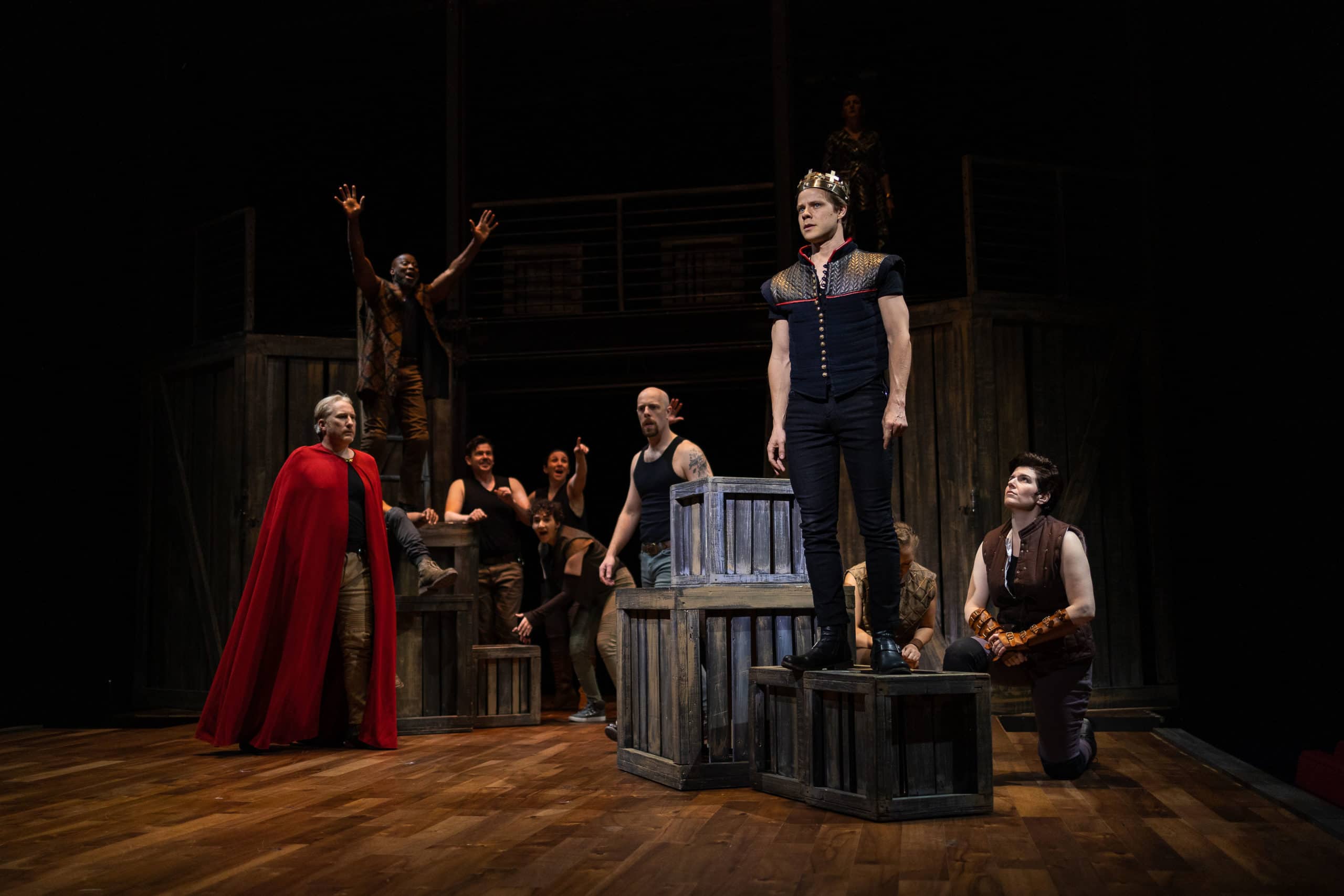 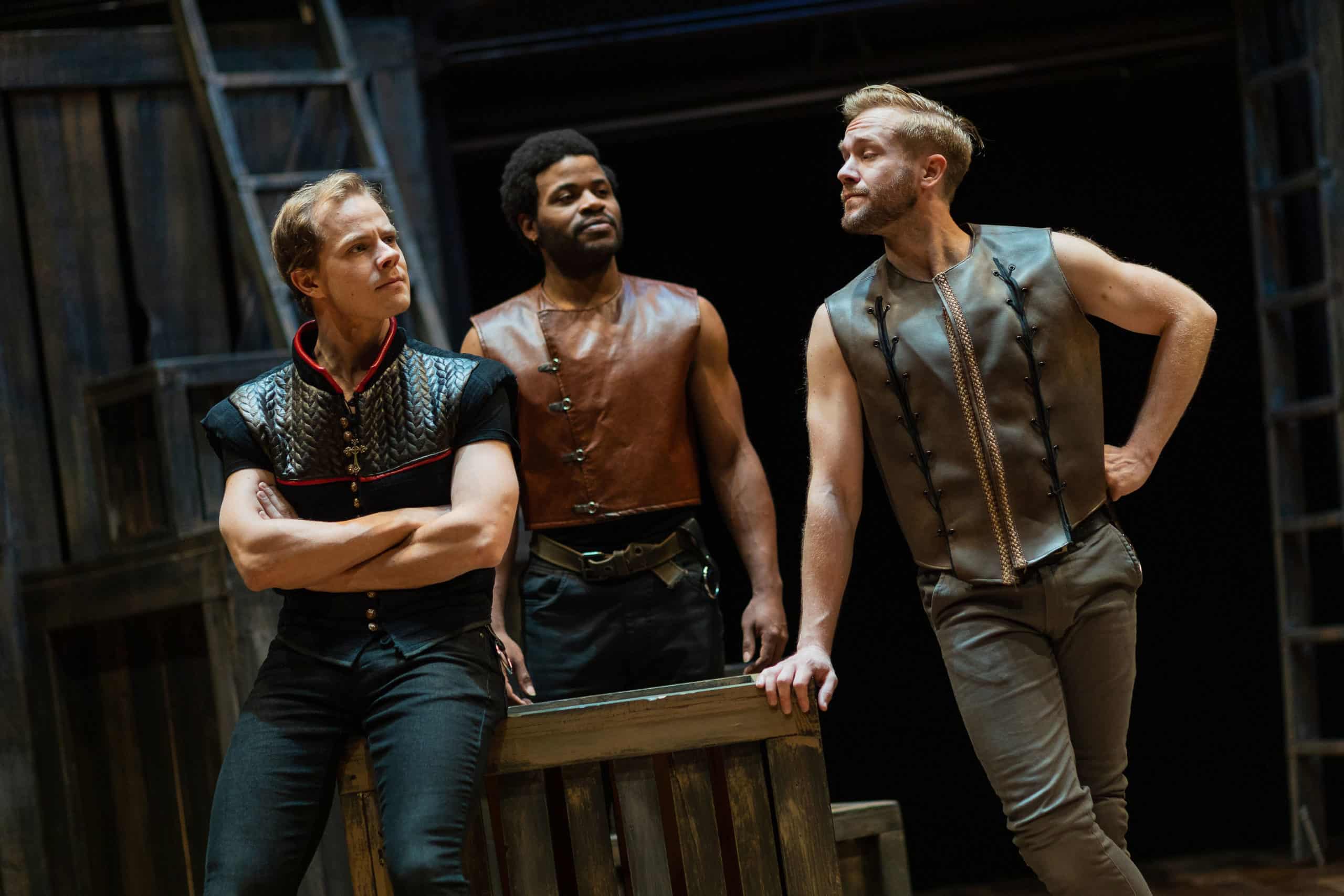 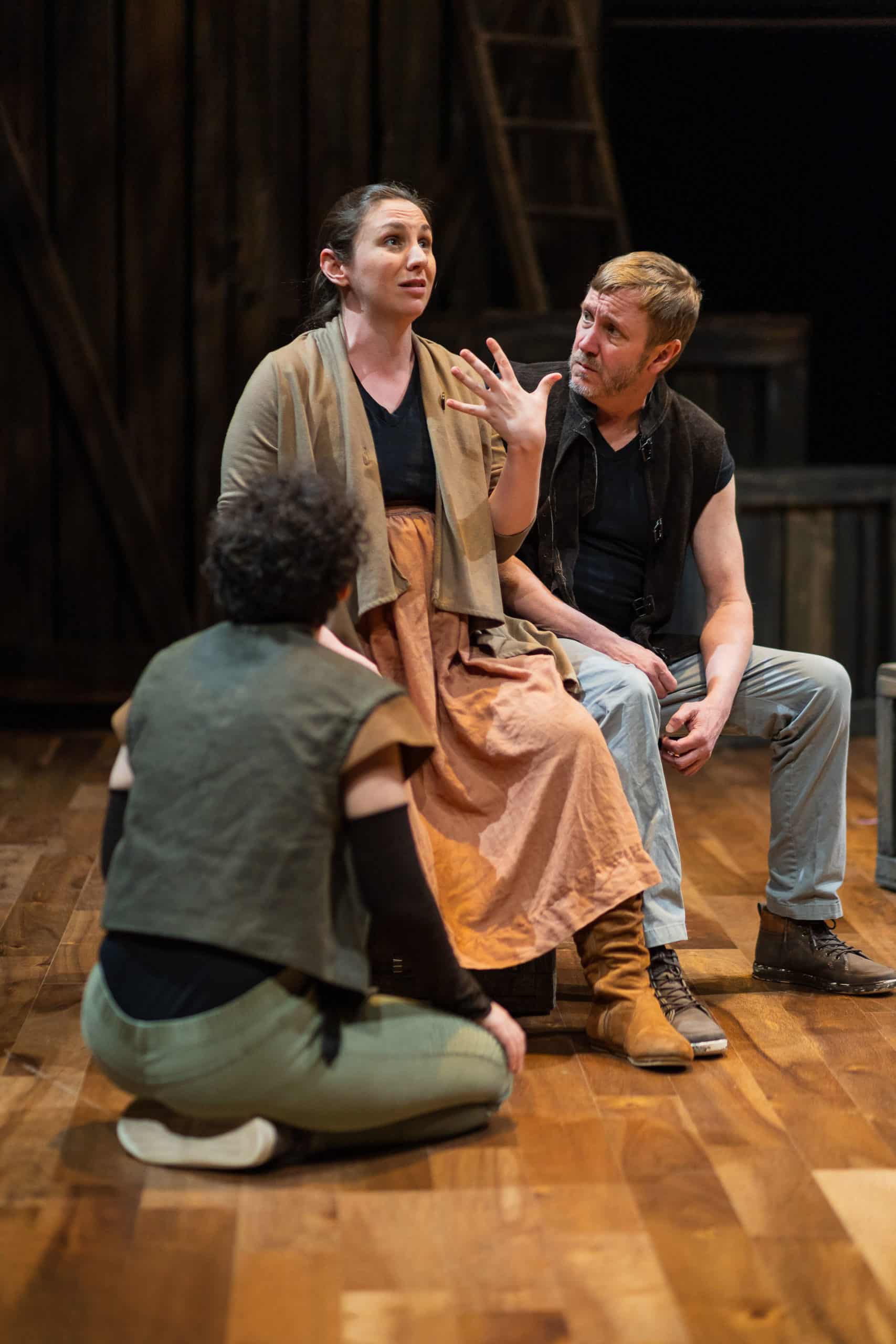 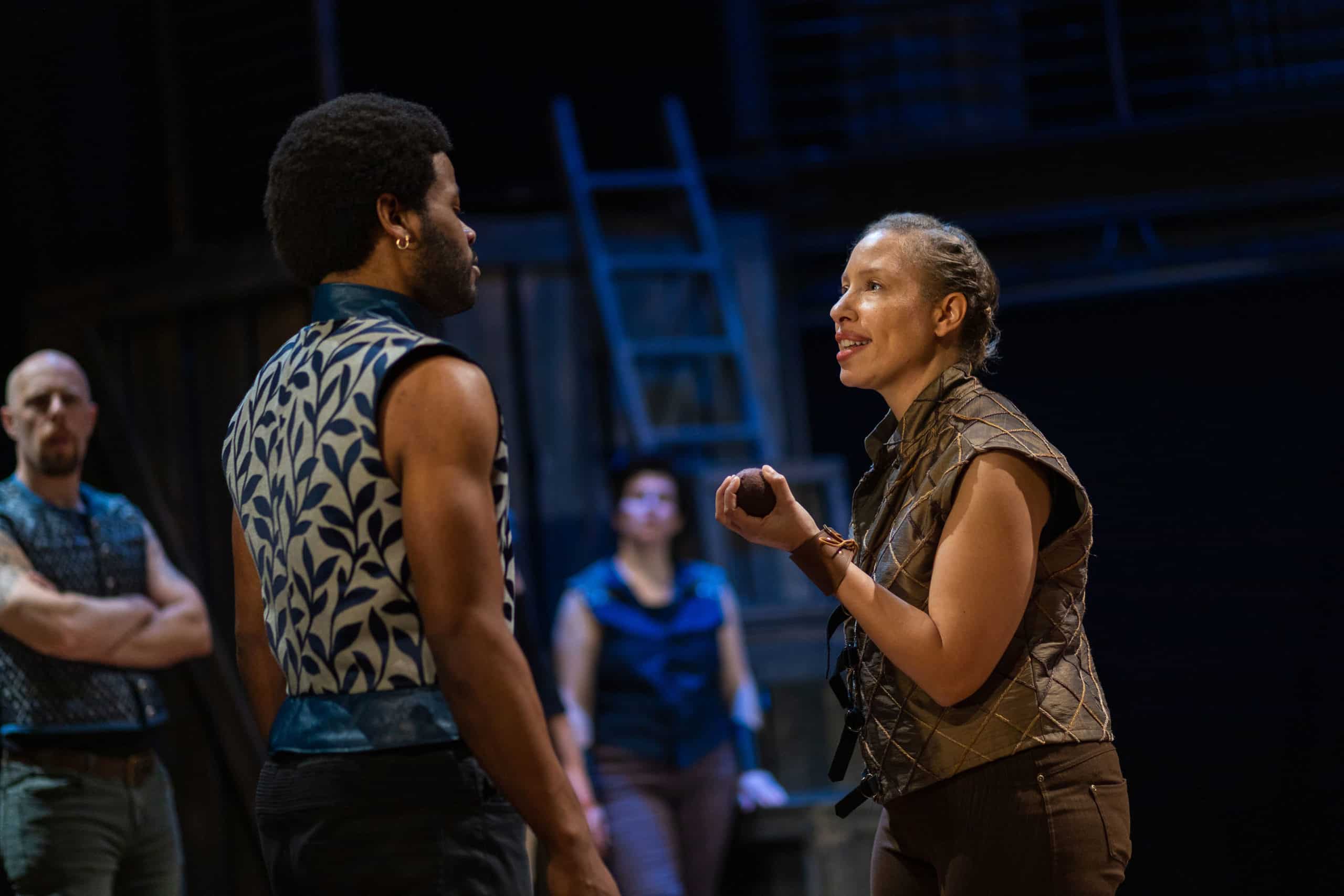 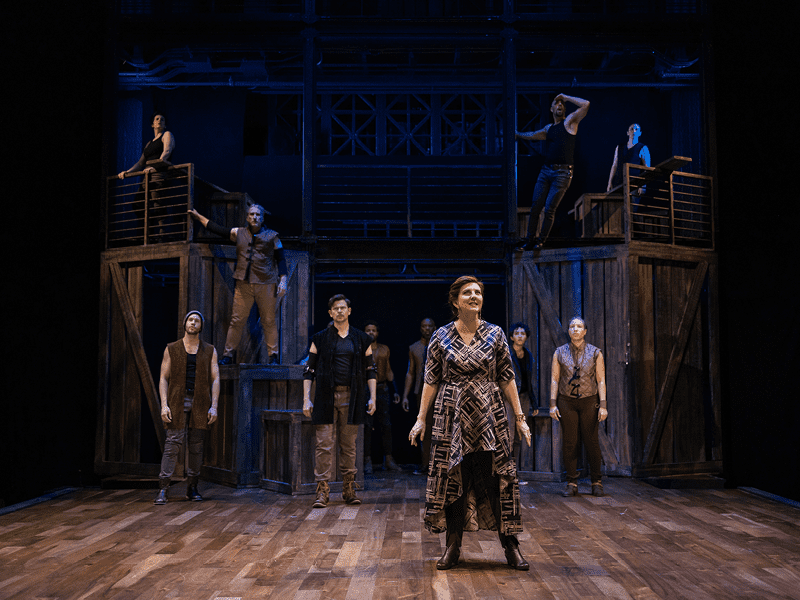 Lesley Malin and the cast of HENRY V. Photo by Kiirstn Pagan. 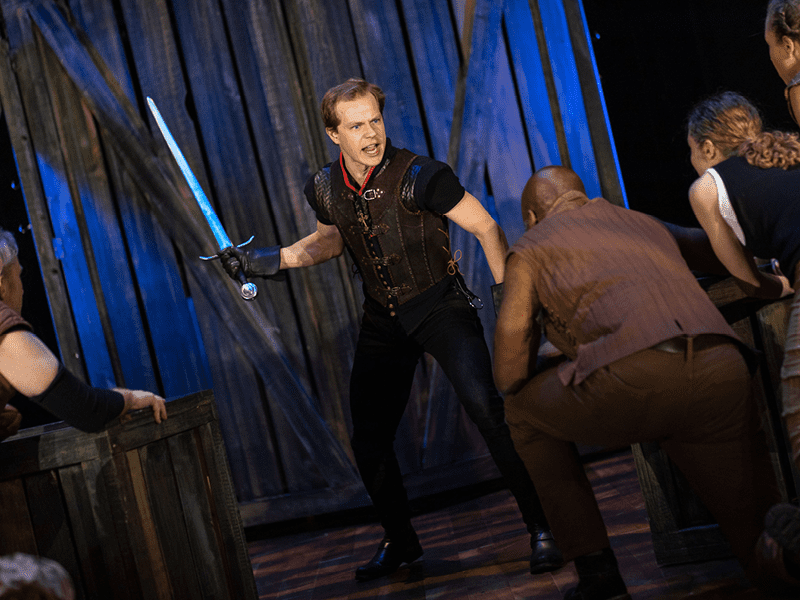 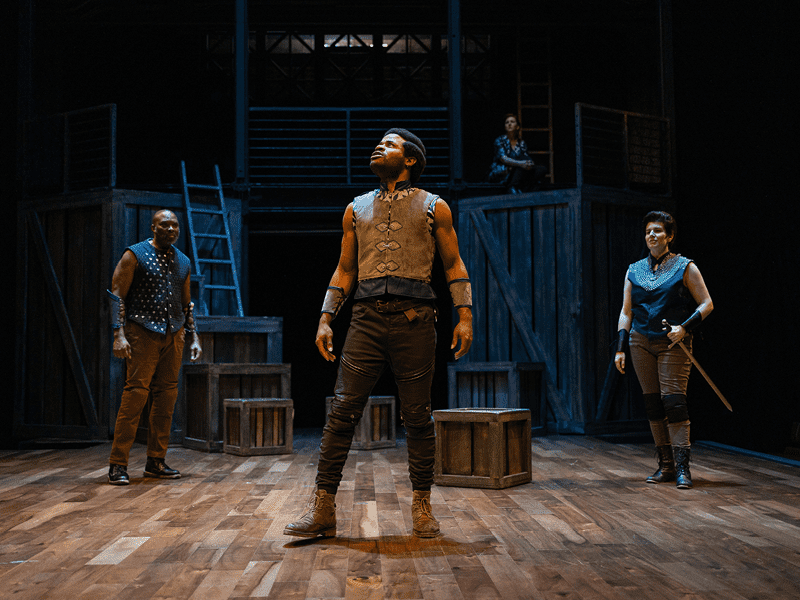 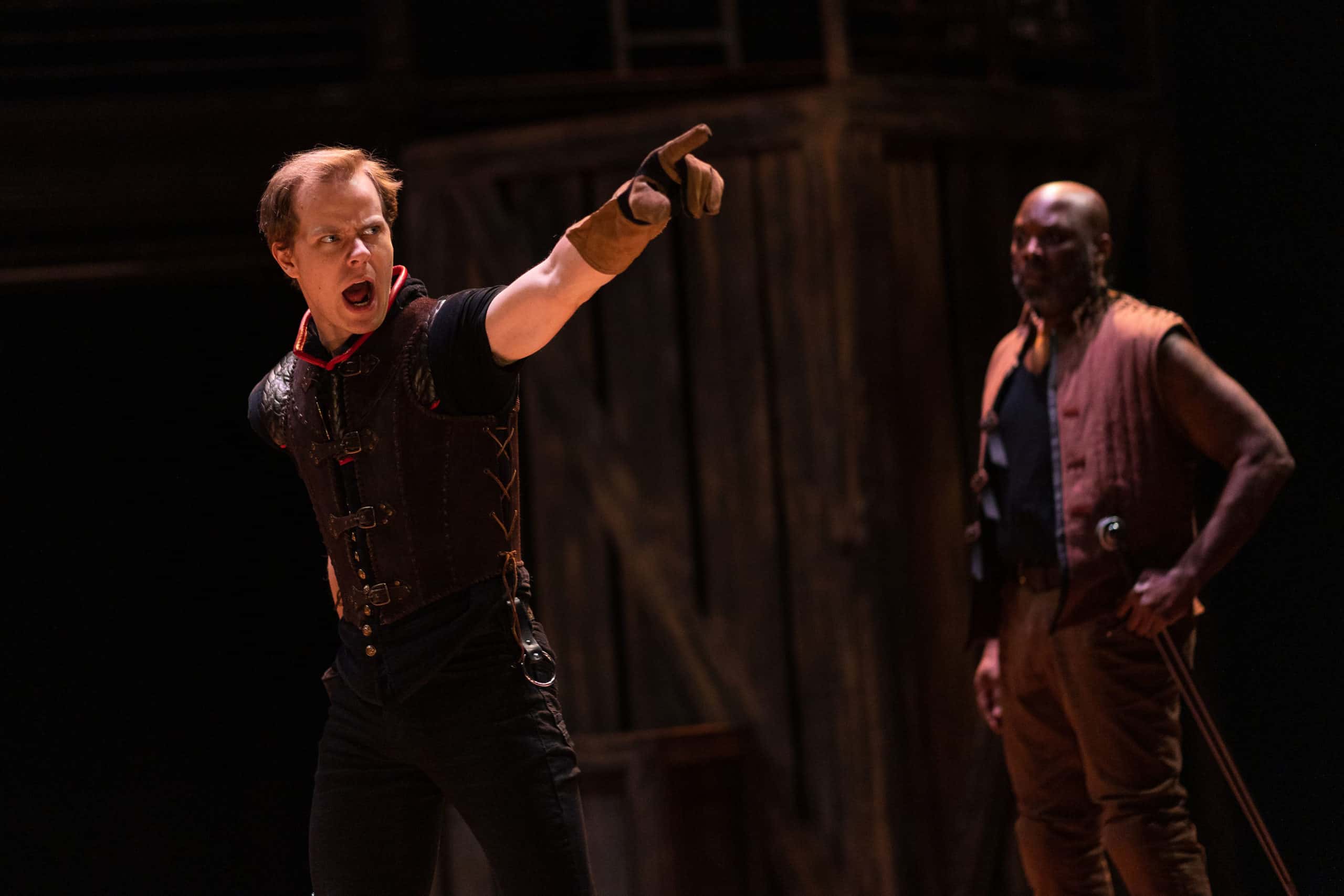 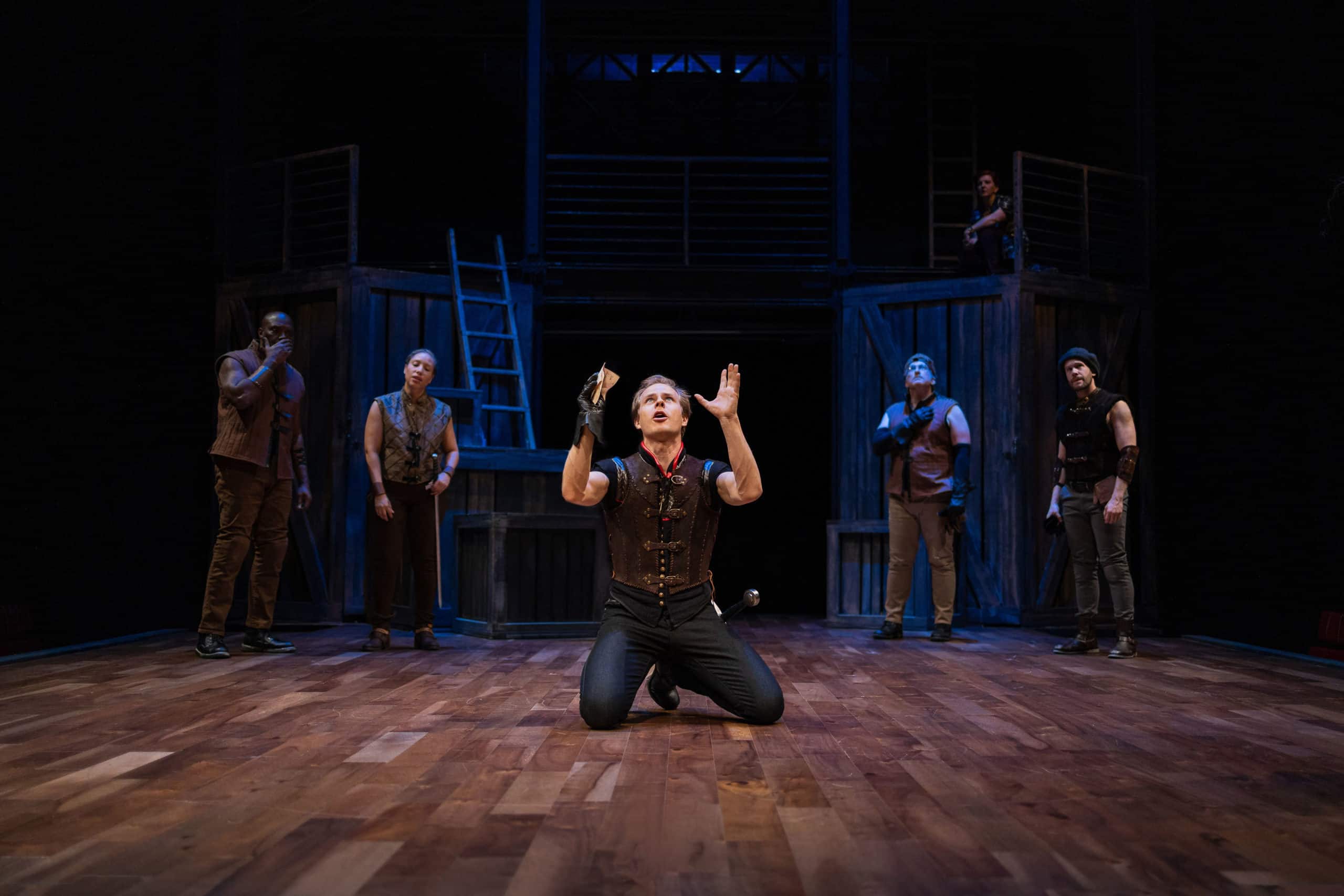 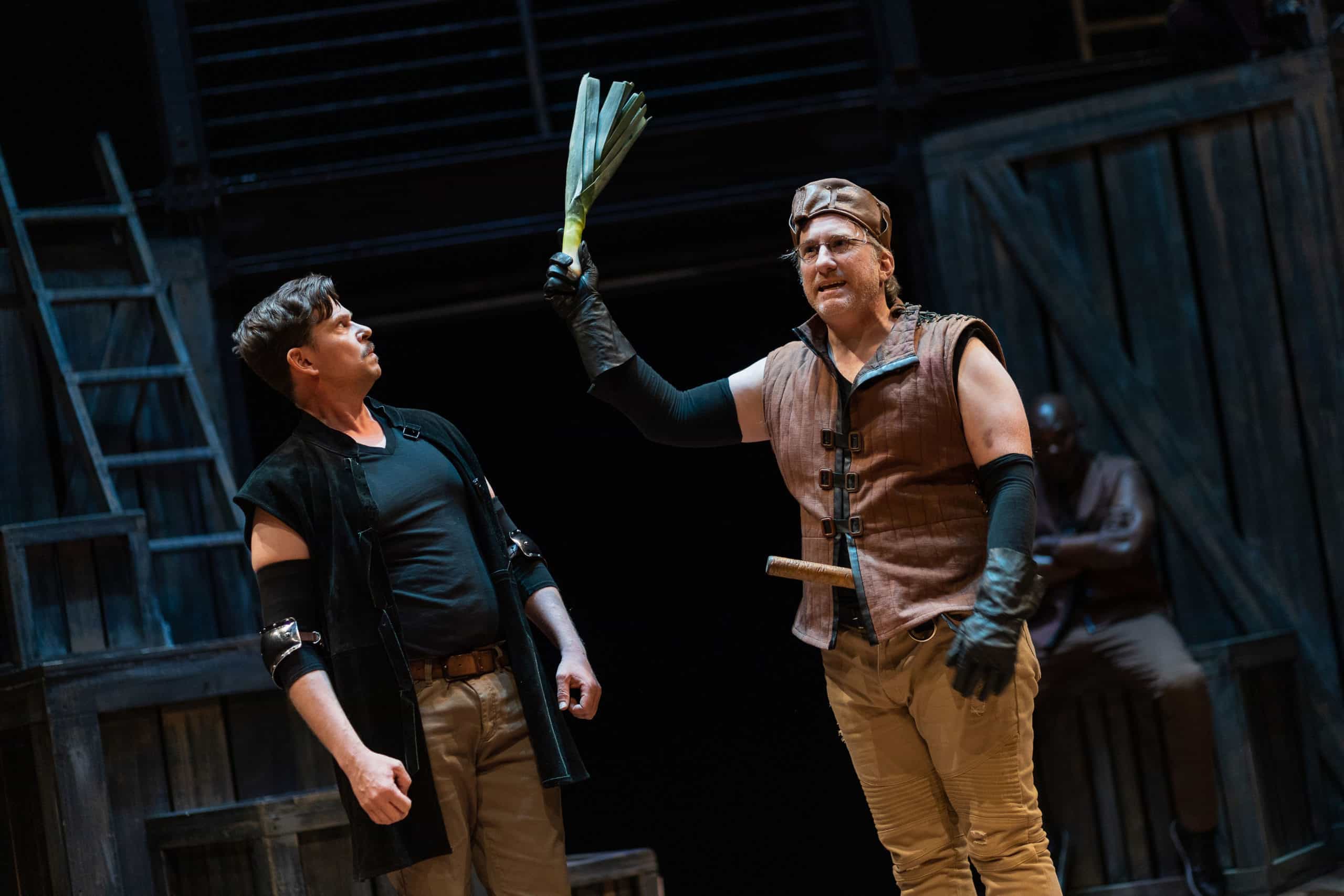 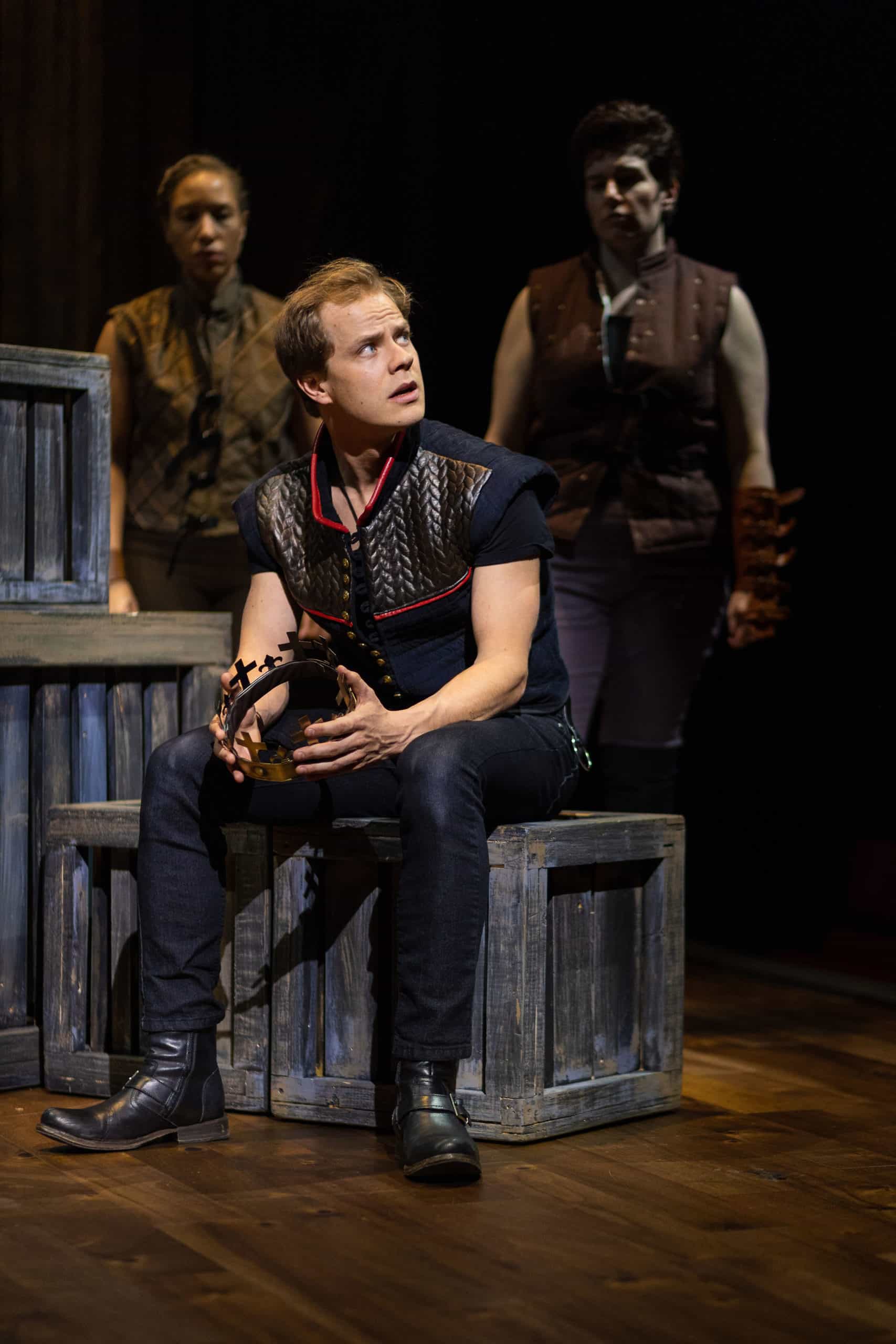 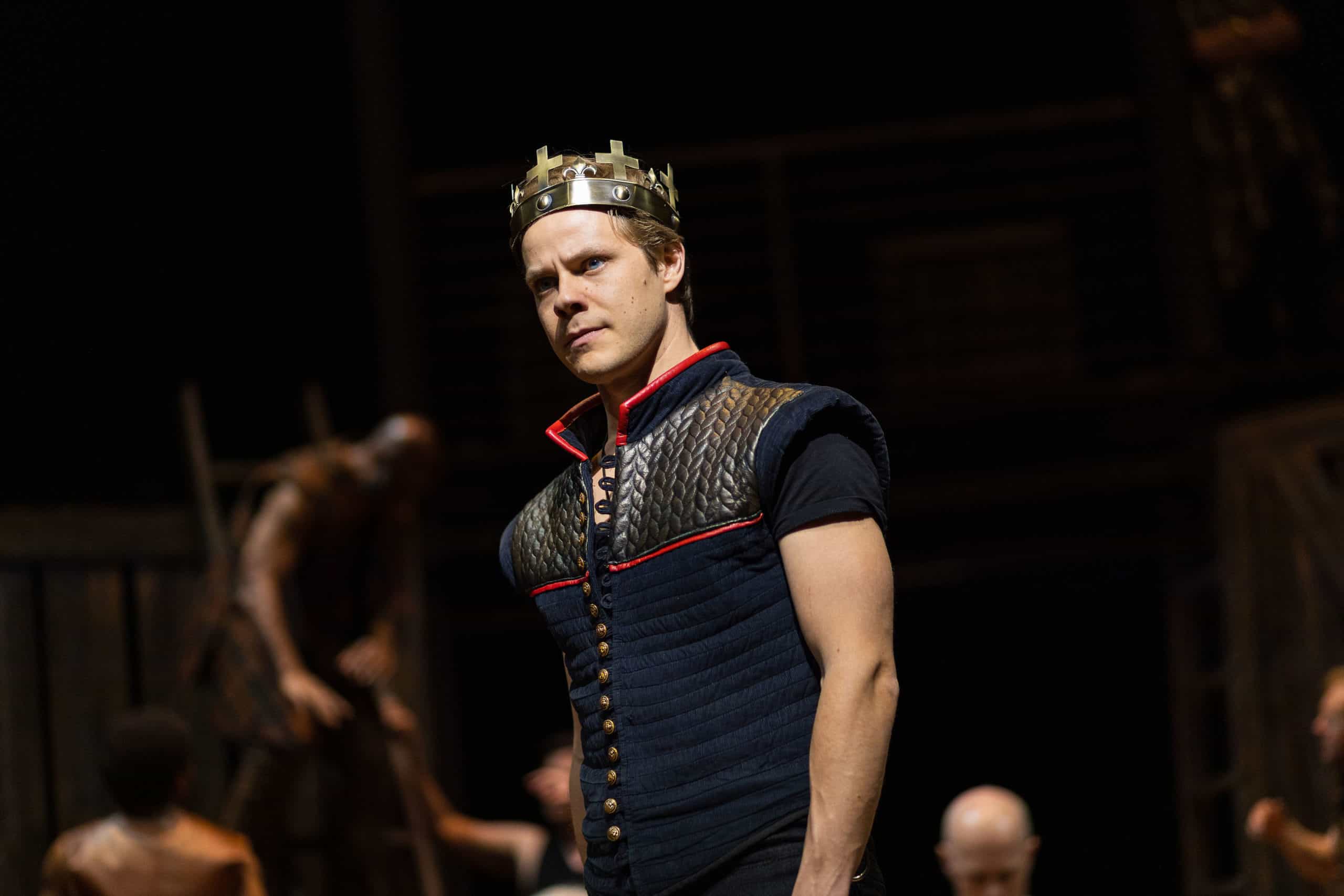 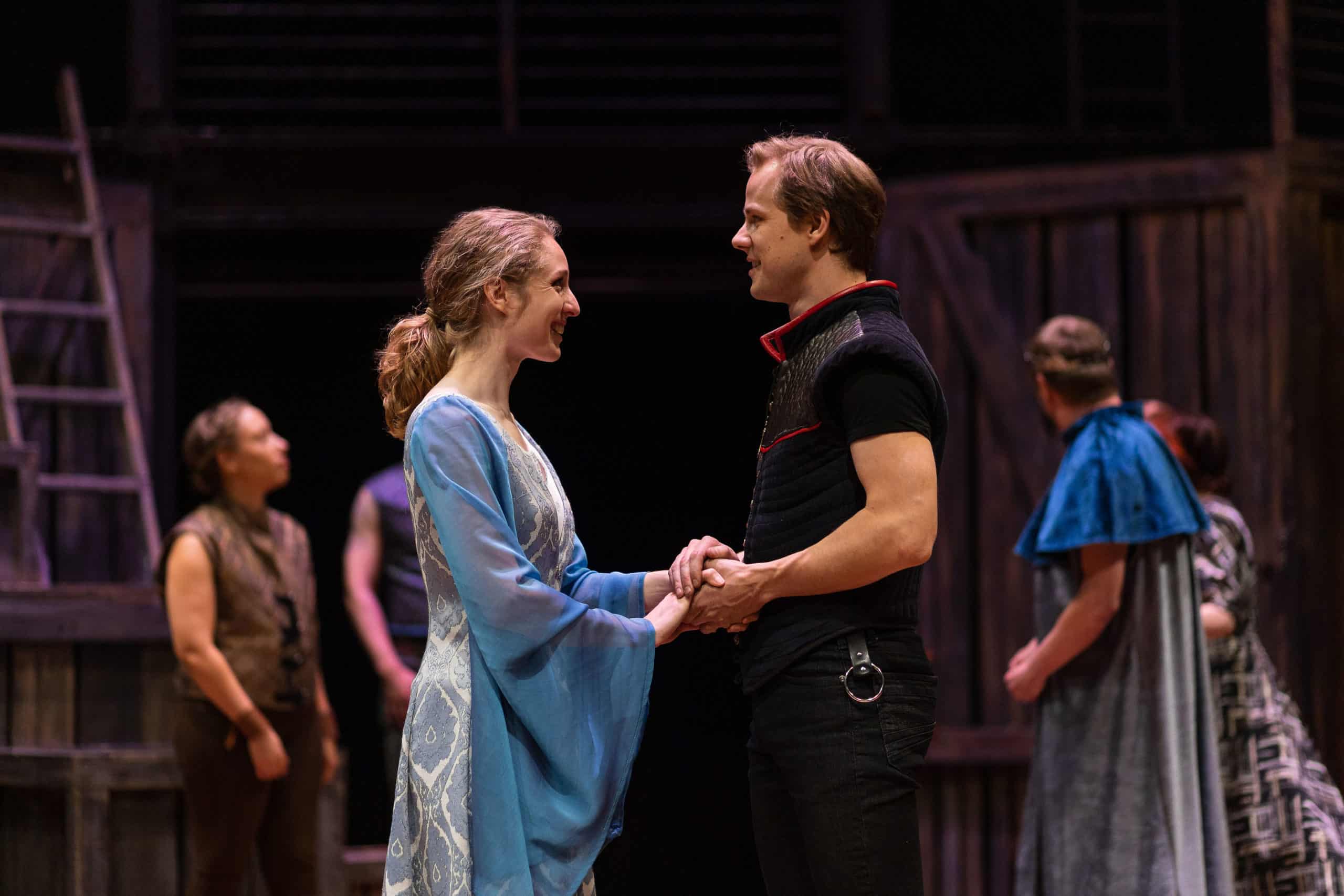 *All COVID-19 precautions are subject to government regulations.